One of my favorite pastimes is playing Ultimate. But sometimes you just can round up enough people to play ultimate. When you don't have enough people or field space for ultimate, goaltimate is a viable alternative. It is played on a smaller field with 4on4 instead of 7 on 7.

But to play goaltimate, one needs a "hoop". So what to do? You can buy one made out of a special shatter-resistant sort of PVC at the goaltimate website. Somewhat nicer are the "dischoop" aluminum, shock-corded poles. I've seen both, but didn't want to shell out the $200+ dollars for either of these solutions. So I made a $26 set.

A goaltimate hoop is 32 feet long. When set up, the two ends should be 18 feet apart, and the center should rise to about 11 feet.

I made my set out of normal PVC (which I've heard has the tendency to shatter at weird times, so I've heard, but yet to experience). To get 32 feet and to have something that is luggable I want 8 pieces at approximately 4 feet (not including overlap). I went down to the local hardware store to look at the 1 inch tubing. You want to get the tubing that has the built-in female end, since that provides about two inches of overlapping. If you use the female-female couplings, you only have about an inch of overlap for both poles (which I've heard can be problematic since you need to bend the hoop quite a bit and can lead to poles popping out). 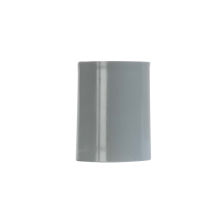 One problem was that the variety with the built-in female end only came in 20 foot lengths. I'd need to buy 8 of them and cut them down. At ~$6 per length it would come out to ~$50 (with a LOT of wasted leftover PVC). Hmmmm. I also needed two 36inch rebar segments to hold up the poles (you hammer these 6-8 inches into the grass to hold the poles up).

I decided that $50 was too much to spend and was thinking about using the female-female couplings. But then I went to another local store that had the 20 foot lengths (with the built-in female connecter) and they said they could cut the PVC for me (using a big cross-cut saw) as well as only charge me by the foot. They ended up charging me $26 for the cut PVC and rebar together. (Another hint is that if you need to cut the PVC, use a hacksaw instead of a pipe-cutter, since the pipe- cutter might cause damage to the joint somehow... this is hearsay as well). The individual pieces ended up being 50 inches long (4 feet + 2 inches for overlap). (I don't think that they actually overlap 2 inches, but it is close).

(For the mathematically inclined here's the formula to get the exact length 8a - 7b = 32 (8 pieces of pvc total length of a, minus 7 times the length of the overlapping intersections (b) should come to 32 feet. Plug in b and solve for a. For 50 inch sections, it comes out that the overlap should be 2.5 inches, which is about an inch too long but oh well...)

My rebar came rusted, so I also bought a wire brush and some rust- resistant paint to paint it with. Spent ten minutes brushing it, then paint a few layers on it.

Buy a couple sets of cones and you should be good to go.

Here's a few hints for setting up the field:

Enjoy your new kit. I played with my family (some of whom had played some recreation ultimate before), all had a good time, and many commented that they liked it better than ultimate.