As a seventh grader I had the choice between learning French and Spanish. I choose Spanish because it was practical (or at least my parents convinced me of that), while it seemed that all the cool kids took French. Excuse my French but I think my parents were right---taking French expecting to actually use it (or have a reason to use it) would be a waste of time. (Sorry to the 2% of my blog visitors to whom that hits home). In fact the same could be said of the two years I took Spanish. I remembered only the colors and my Spanish name, "Paco".

But taking Spanish for two years twisted my brain enough that I actually took a year of German after (again useless if I were expecting to use it to purchase say a Mercedes). And it was easier this time. When I did become fluent in Spanish three years later, I was grateful that I had learned how to conjugate verbs previously. My uptake was quicker because I had practice. In two months I was dropped off in the middle of Colombia and held my ground ok. (Later my Spanish professor would inform me that speaking in Spanish is insulting in Gringolandia, and I don't pull it out too much now. So it was useless.)

Likewise, the Pascal class I took in High School wasn't super practical. I didn't even have a machine at home to code Pascal on. I haven't coded in Pascal since. Yet the logical manner it taught me to think has been a wonderful life skill. It has even helped me to debug plumbing issues. When a the faucet is clogged, I could just disconnect the pipes connecting the faucet to the wall and start snaking around in the wall. But (given that I have girls around with long hair) it makes sense to start right at the faucet itself and snaking that without even disconnecting any pipes. Less mess, and more time for other less grimey things.

(Alas learning more about plumbing has helped in other areas as well, such as knowing how to replace a toilet, or stop a leak. It's probably a decent life skill to have if you are a homeowner or live in a place with running water.)

The section I took on Lisp in college was not super practical either. Even then no one programmed in Lisp. Why did I waste that time? Because I have experienced functional constructs, I now appreciate them and see their utility (and even the allure of Clojure). I appreciate list comprehensions, first class functions and the laziness of generators. (If you have read this far in the post you'll notice that I also like parentheticals.)

I had the chance to teach ~80 year old man how to program. He wanted to learn just for the sake of understanding what the little creatures inside of his computer were doing. Waste of time?

I've taught 3rd graders how to create ebooks. That was really an excuse to teach them xml, html, css, typography, fibonacci sequences, image compression, debugging and actually learning how to use a computer for something other than clicking the blue "e" and typing in starfall.com. I neglected to inform them that they could have just as easily written their books in Word and exported to HTML. I don't feel guilty about that. (Some even wrote thank you cards in both HTML and the rendered output!)

I have also been able to teach 3rd graders programming. They were able to create simple text games with conditionals, functions and looping constructs. Did they create the next 3D shooter? Did they even create a game that they'd like to play more than once? Mostly not. But they learned a little bit about how computers work. They also learned how to think logically, and how to be specific. (My wife compiler still complains that my English isn't specific enough---too many "this" and "that"s at line 0. To which her compiler responds "I have no idea what you are talking about!") 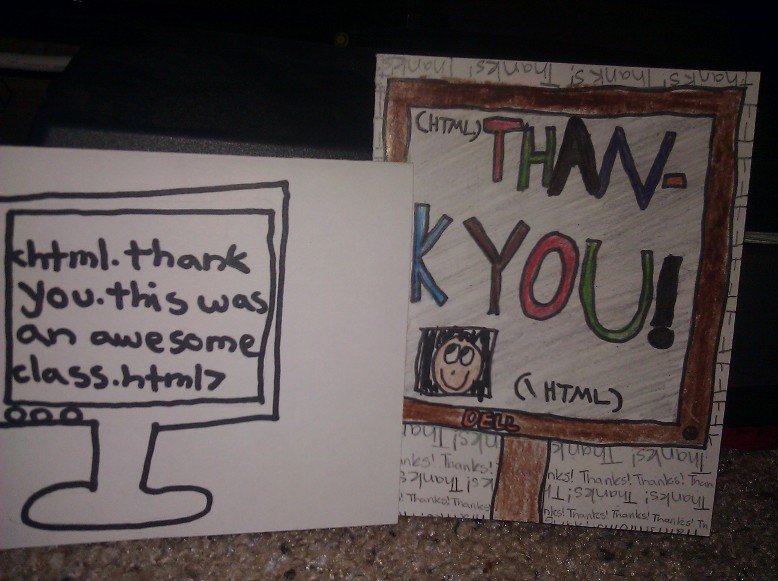 Today, the world still runs on Excel. A poor man's database or programming environment. Just today a co-worker asked to help move some data from Excel to a program so more advanced calculations could be performed on the data. There was also an urgency to get rid of the manual labor of tweaking rows and columns. The end user wanted automation and power. (And to be lazy).

If you have any inclination of working with programmers you should take CS101. You need to have some semblance of understanding of what they need and what you need to help them. Do you feel like a doofus when a car repair person is telling you what you need done to your car? Do you want to get ripped off by the plumber telling you the twenty things he needs to fix?

How often am I burdened by my (loving) family and neighbors, who knowing that I "work with computers" think that that means I can clean the spyware off their XP installation! I imagine that I would not play that beast of burden if others had some understanding of how computers and the internet actually worked.

Surely a little understanding of what powers the digital aspects of our lives can't be too harmful.