I continue to prefer Goaltimate for groups of 13 or less. It's a great game, one gets lots of touches and newbies, seasoned folks can play together. I think it improves new ultimate players throws better than ultimate does. It's great for warming up. We usually play until we have enough for ultimate. People continue to be skeptical before playing, and the majority comment something like this after playing:

That's a lot more fun than I thought it would be

That's cool. Where did you get the hoop?

I prefer this to ultimate

Ok, only a few say the last one, but they have said it. Then there's the group of people who won't give goaltimate a chance. They'll either sit out and wait til there's 10 people and then want to jump to full field 5 on 5 ultimate, or they'll play grudgingly. There seems to be another small group of people who believe that goaltimate is too hard on their bodies (knees and ankles) who also won't play unless they've got 5 other people begging them to. But I'm digressing.

A complaint I've heard is that it takes too long to set up goaltimate. I don't think that's valid. (With the aluminum hoops it's even quicker). A field can be set up in about 2 minutes. Here's how:

How to set up a Goaltimate field

A benefit of goaltimate is that it can be played in smaller areas. I've played inside in basketball courts. Can't do that with ultimate. Also, nice large grassy areas tend to get chewed up quickly. But smaller ones not so much. So you can usually play goaltimate on a better field (often it's right next to the ultimate field).

Step 2: Step up the hoop stakes

Because the hoop is fixed in size, it's important that it be set up the correct distance of 18 feet. Here's an easy way to do it. If you got a pvc set (with 8 pieces) connect 4 of them. That will be 16 feet long, so stick a foot on each side and you've pretty much got 18 feet. If you've got the nicer aluminum poles, find the middle and mark it with a sharpie. Here's an illustration that should make it pretty clear.

Setting up the pole is a two person job. (As is taking it down). Have a person on both ends of the pole and put both ends on the stakes at the same time. People seem to be wary of making the pole bend, but it will do it.

The goal line cones are set inline with the hoop, 3 feet away from each stake, making them 24 feet apart from each other. 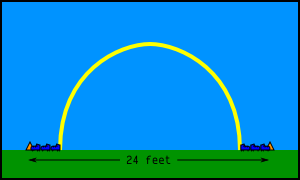 From the hoop take 8 paces back (I'm assuming your paces are 3 feet), and drop a cone. Note that the depth of the goal is the same as the width of the front cones. It seems that some like shallow endzones (perhaps the intent is to make the goal actually be a semi circle, which it is not). The full endzone opens things up a little and allows for more endzone throw possibilities. Here's an image:(The rest of the images are top down) (Note that the regulation field image (the circular one) doesn't have the endzone scaled correctly) 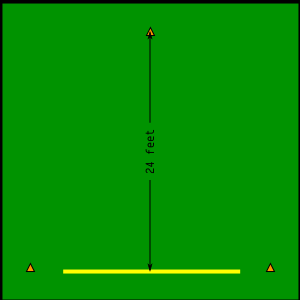 From the back cone I work my way around with 3 more cones on each side. 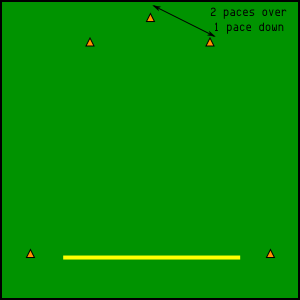 Continue in the 2/1 pacing around. 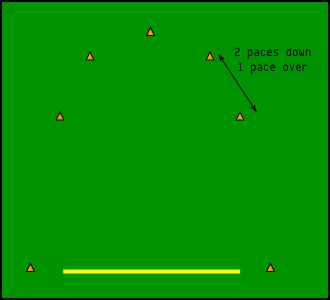 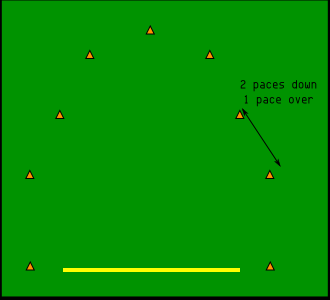 If your players tend to goaltend a lot and don't like the 3 second rule (or just step out if front of the hoop and poach there), you can make the crease in front. The rules specify that you can't hang out in the area 1 yard in front of the goal either. 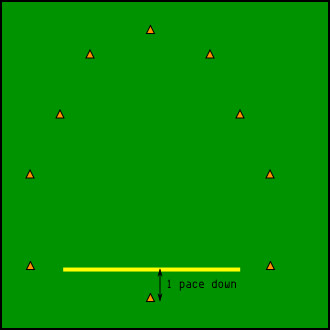 From here on out I'm no longer "regulation". I've never seen a circular field in the different games I've played at. Most are either rectangular or boundless. When we play indoors, we play rectangular (obviously), and we play without boundaries outside. 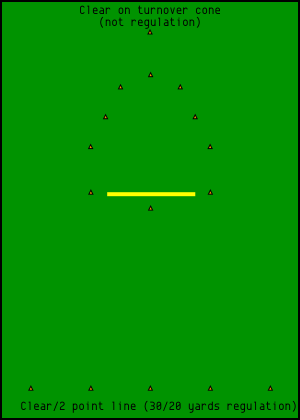 Regulation calls for a clear line of 30 yards that arcs out from the hoop. And then a 2 point line (that is parallel to the goal line) at 20 yards out. Again we normally just set up four cones about 20 yards back for a clear/2 point line. The distance of 20 yards can be tweaked depending on energy levels, number of players or field size.

Another (non-regulation) tweak that we add is a cone about 10 feet behind the endzone. This is the "no-clear" area. If the disc ends up behind it on a turnover, you don't need to clear. Some people are confused in that they think they can clear it there as well. NO! If they pick it up behind the cone, then they are cleared, otherwise the only way to clear is the normal clear line.

We normally play 3 on 3 or 4 on 4. If we've got more people, then we'll sub on error. What that means is if you throw an uncatcheable throw, or you drop a catcheable throw, you sub out. This tends to give everyone a pretty fair playing time.

I've posted previously about how to make hoops. My original PVC set got a crack once as a player collided with the hoop (must have blended in with the white snow at the time). I'm a fan of the aluminum hoops (which I also have). They are better in every way; lighter, smaller, easier to store, easier to setup, easier to take down, and more durable. Why weren't we using them yesterday you ask? Because my friend who has (permanently borrowed) my PVC set arrived first....