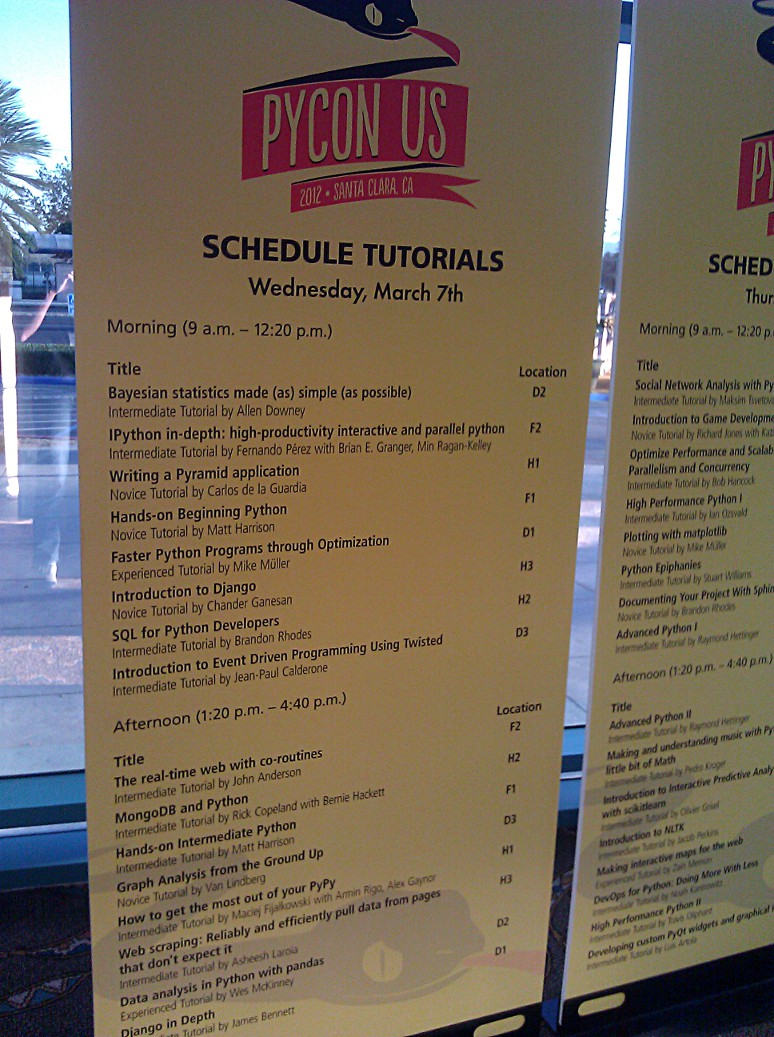 Here's just a few notes from my PyCon 2012 experience. This was my 7th PyCon, and though the conference has changed over the years, I think it is mostly for the better. A general theme of PyCon this year was data analysis. I'm probably biased since I'm doing that at work. In contrast with previous years, where there seemed to be two Django tracks running concurrently.

The quality of the talks has also increased over the years. Most of the talks I attended appeared to be well rehearsed and pretty well thought out. Though I did hear some grumbling that many talks could have gone a little deeper.

The quality of the food was excellent this year. The quantity less so. I heard one attendee claim he "lost 5 pounds during the conference". But herding 2200+ people through the lunch line is no small task and the team did it with efficiency and ease.

The layout of the conference was a little confusing. There was a double indirection between talk locations and the actual locations. Talks were located in a track. A track was located in (what appeared to be an arbitrary) room number. Said room number did not line up with the pre-existing hardcoded conference room numbers and in some cases conflicted. This caused confusion on the first days of both tutorials and sessions. With 2200+ people confusion of such type can be annoying.

Also the layout of Open Spaces, and the open space signup board was relegated to a far side of the building that didn't get much traffic. The two BoFs I hosted were poorly attended. Perhaps that is due to marketing or the subject in general (yes, Python tiling wm's are boring), but there was very small traffic through the open space, with the exception of the TiP BoF. This BoF was probably larger than the first PyCon I attended.

Previous years also had a job board. I told a friend that I would post a job listing for them. But alas, I never saw the job board this year. The exhibition hall was perhaps a huge t-shirt dispensing machine, but no corkboard to post a description on. If you are interested in changing the world working at a non-profit, ck12.org is looking to hire.

The PyCon 5k was a excellent respite from days of sitting and breathing regurgitated air. The amount of minimalist and even barefoot shoes relative to the general population leads me to believe that pythonistas are geeky, enlightened or suffer from Stockholm Syndrome. I really enjoyed it. During my final tutorial an attendee pulled out an ultimate disc. It was great to get outside in the wonderful weather and toss the disc around. 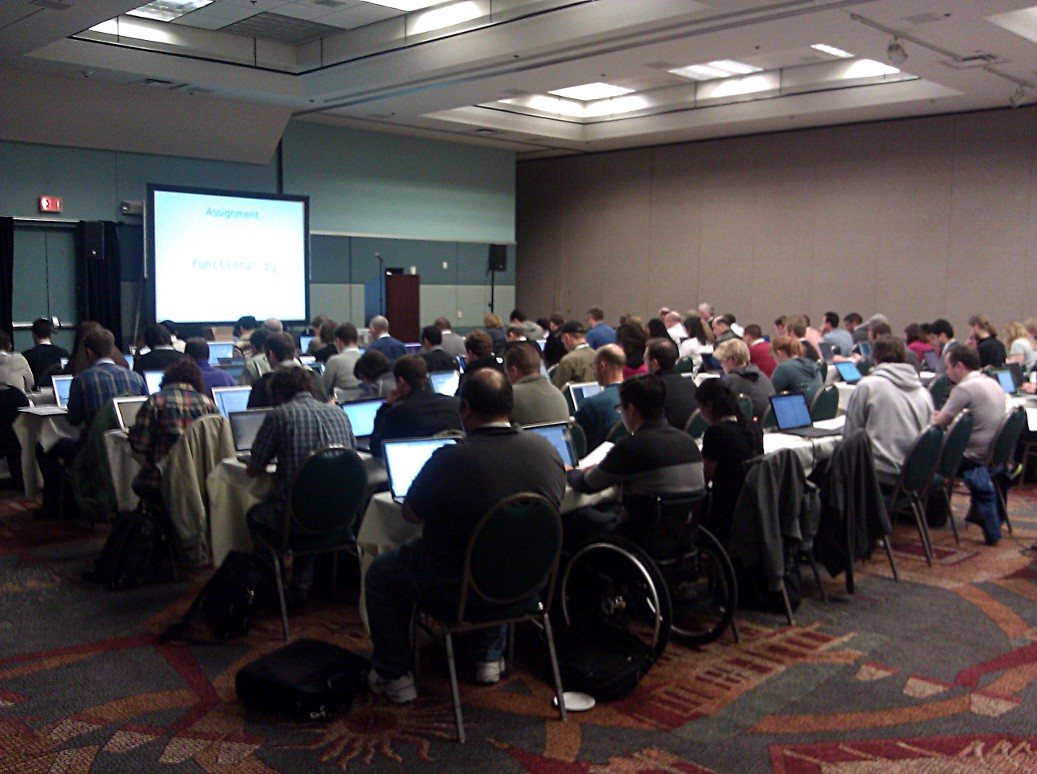 My tutorials were packed. My biggest issue was the influx of people 25 minutes into the first session. Being that it was beginning Python, that caused a small delay as I helped people get going. It is pretty satisfying to walk around during the assignment portion helping people out and realizing that 95% of the people are busy hacking away. They weren't just browsing Facebook or reading email, they were actively learning Python. One attendee told me it was the best tutorial he had ever attended, which is nice to hear. I also recieved some more constructive criticism from others. I'm always open to feedback, and if you attended one of my sessions you should fill out the tutorial survey.

Yes, Python videos are now up on the web. Some of the content is there. But the conference is more that the videos. I was talking to someone who was relating that they had an issue with translation while they were travelling in Siberia. They did a lazy twitter and got a response. While we were talking about this a fellow entered the conversation who was from Russia. Lo and behold he was the lazy web helper, but the two had NEVER previously met in real life before.

So yes, PyCon is about the people. And even though there were a lot this year, it was a great conference.