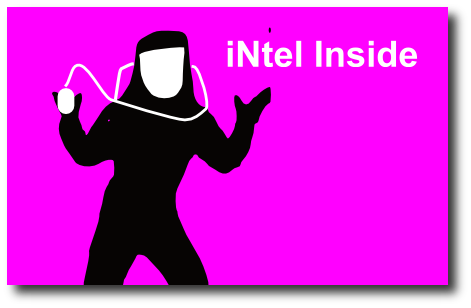 Not quite sure how to react to this. The only reason for the "switch" as I understand from reading the keynote is a speed bump. Since MacOSX will only run on Apple sanctioned x86 hardware, is there really a difference if it is not ppc inside? There "shouldn't" be a difference, but...

There could be some residual effects. It might cannibalize PPC sales for the next year (and I thought apple was a hardware company). Soon after the release, hackers will probably make osX work on most any x86 box. That should scare MS. I don't know if Steve wants to stop being the BMW of OSs and become the Toyota of OSs (I'd probably buy a copy if it was released generally for x86), but having Dells ship with OSX would be pretty cool (I wonder if the margins of OEMing OSX would be greater than the huge markup to the smaller market?).

I purport that competition is good (it's sad it a way to lose competition on the processor front too). More widespread use of a great OS should inspire open source developers. Will there be some sort of "wine" for apple x86 binaries? Will linux-cocoa binding be created/reversed engineered, thus allowing some great applications to be easily ported to linux? The end of Pearpc and Cherryos? ;) Will I be able to virtualize OSX and MS on top of Xen with the new Vanderpool chip?